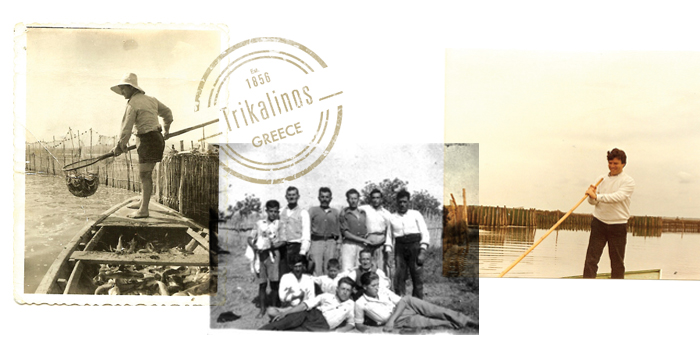 1942   Panagiotis Trikalinos (son of Zafeiris and father of current owner) as an expert in avgotaraho extracting and most famous skipper in a number of fisheries in Etoliko lagoons, runs the avgotaraho business.

1997   New production facility in Athens, the first certified production facilities for Avgotaraho in Greece. All traditional techniques are conducted under standard procedures that guarantee the quality, hygiene and food safety of Trikalinos products.

2008   Trikalinos introduced the Fleur de Sel (Sea salt). Significant publication in the reputable American scientific “Journal of Agricultural & Food Chemistry”, of the encouraging results of the first research on the nutritional value of Trikalinos Avgotaraho.

2009 Trikalinos New Packaging is being awarded the Bronze Medal at the Pentawards.

2011   Preliminary results of an in vivo research, conducted by Pasteur Institute, show that Trikalinos Avgotaraho as a dietary supplement may have an antiatherogenic potential.

Trikalinos Gift Box receives the First Packaging Prize at the packaging competition organized during the “Greece: a feast of Tastes” Food Festival, in Athens. The launching of three new products, that are developed and produced by Trikalinos company Branded as “ alati: Natural, Herbal, and Smoked “. The series of products are under the dual branding of both Trikalinos and Gaea companies.

2014  The No 1 Restaurant of the world for the year 2013, the “El Celler de Can Rocas”, launches a dish dedicated to Trikalinos Bottarga, with marinated mackerel, anchovies, capers and pickles. Trikalinos launches a new innovative packaging for its new product Trikalinos Sea Salt, for which is being awarded the Bronze Pentaward in Tokyo, at the same year.

2015  A major investment of the company in R & D leads to the beginning of a new scientific research, with relation to the consumption of Trikalinos Bottarga, the results of which are expected on the beginning of 2017. The specific research will lead to the creation of new and innovative products for the company and will bring into light further significant health properties that are related to the consumption of Trikalinos Bottarga.