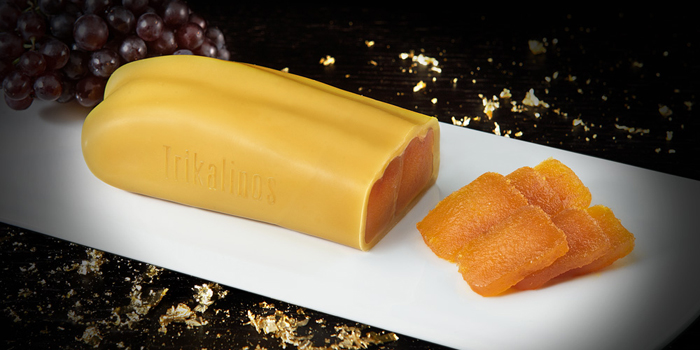 AVGOTARAHO IS ONE OF THE OLDEST FOODS IN THE WORLD

Possesing a significant role in the diet of ancient Greek and during the Byzantine Empire, it became part of Greek culinary heritage.

Trikalinos Avgotaraho is a product with high nutritional value, mighty taste and extremely long aftertaste. The more velvety texture it has, the more nutritionally rich it is.

The Trikalinos Avgotaraho is undoubtedly one of Greece’s most traditional products, whose development gives us the power to create imaginative and delicious dishes, surpassing the tradition that imposes to be eaten plain or just on top of bread.

Try it with legumes, vegetables, fish and seafood as “prosfaisma” – the Greek word for the side dish- to bring out the sea breeze in your meals.

The Trikalinos Avgotaraho has a significant nutritional value, as a result of its lower sodium content and its higher moisture levels. As a 100% natural product – containing neither preservatives nor additives- must be stored refrigerated, so that it will remain juicy throughout its shelf life.

To easily remove the protective wax leave the Avgotaraho stick outside of the refrigerator for at least one hour before you cut it with a sharp knife.

Keep the remaining waxed Avgotaraho in the drawer of the refrigerator, covering the exposed part with cling film.